The Ryukyu Archipelago makes up the southernmost islands of Japan (Fig. 1) and mainly consists of the Amami, Okinawa, Miyako, and Yaeyama Islands. The Miyako Islands are located between Yaeyama and Okinawa Islands and are comprised of eight islands: Ikema, Irabu, Kurima, Minna, Miyakojima, Ogami, Shimoji, and Tarama (here, “-jima” is used for “Island” to distinguish it from “Islands”). In these islands, about 55,000 individuals are living within a total area of 204 square kilometers. 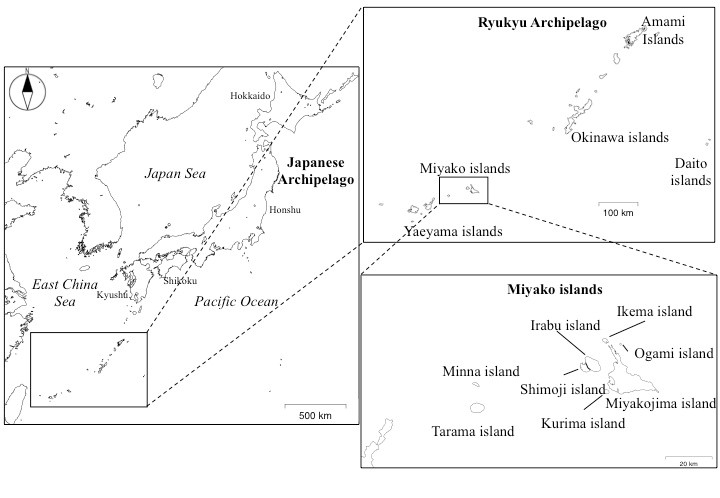 Archaeological studies have shown that human bones dating to 31–28 kilo before present were excavated from the Pinza-Abu Cave site on Miyakojima, indicating that human settlement on the island dates back to the Paleolithic period. However, genetic analysis in modern Ryukyu people suggested that the Paleolithic people in the Ryukyu Archipelago are not the main ancestors of modern Ryukyu people, but rather that modern Ryukyu people are descendants of migrations from the Japanese Archipelago in the Neolithic Period or later. However, the detailed population structure and the origin of people living in the Miyako Islands has not yet been elucidated.

From 2016, University of the Ryukyus launched the biobank project in Okinawa, called Okinawa Bioinfomation Bank (OBi) Project, which is promoted by Cabinet Office, Ministry of Education, Culture, Sports, Science and Technology (MEXT) in Japan, and Okinawa Prefectural Government. As a part of OBi Project, Professor Shiro Maeda and colleagues have collected plasma, genomic DNA and clinical information from more than 18,000 individuals living in the Okinawa prefecture. From these samples, the researchers genotyped more than 600,000 single nucleotide polymorphisms (SNPs) for 1,240 individuals living in Miyako Islands, and these data were utilized for population genetic analysis. 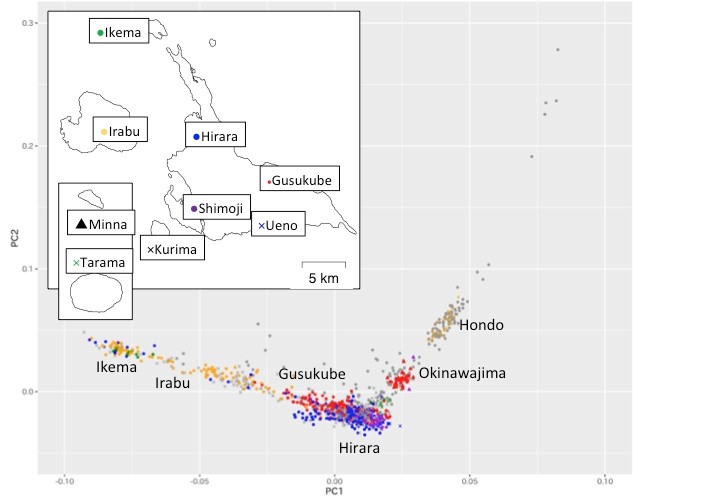 The principal component analysis (PCA) plot using genome-wide SNPs data for individuals living in the Miyako islands obtained by OBi Project indicated that there were several genetic clusters, corresponding to individuals from Miyako Islands, Okinawajima, and Japanese Archipelago (Hondo), respectively (Fig. 2). In this analysis, they found that the Miyako cluster was widely scattered along the PC1 axis compared to other clusters. It is suggested that genetic heterogeneity exists within the Miyako populations. Until 1902, free migration within the Miyako Islands was restricted by implementation of the capitation tax system which may have enhanced genetic diversity within the Miyako Islands.

To elucidate genetic population structure within the Miyako people in more detail, they conducted a haplotype-based analysis, which more sensitively detects genetic differences. The result indicates that the Miyako people are divided into three subpopulations corresponding to geographic regions in the Miyako Islands (Miyakojima northeast, Miyakojima southwest, and Irabu/Ikema), with one exception; Nishihara that belongs to the Miyakojima northeast region (Fig. 3). Based on information in the literature, the Nishihara settlement was established by immigrants from Ikema island in 1873. Thus, their genetic analysis was consistent with historical documentation. 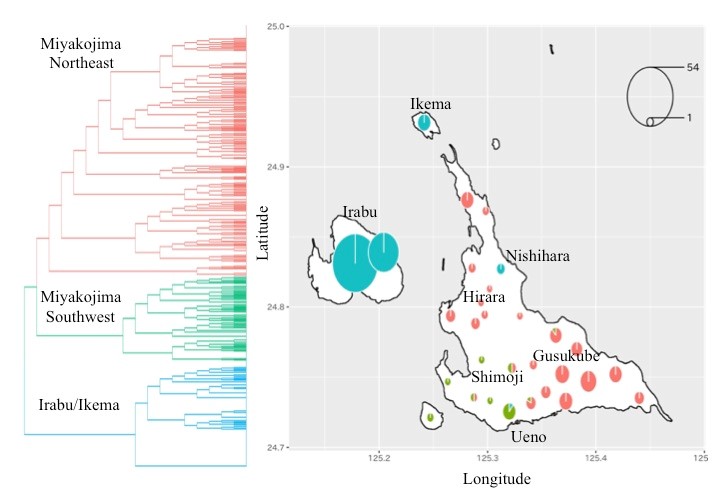 Left panel: Dendrogram generated by the FineSTRUCTURE program. The Miyako population was divided into 3 subpopulations denoted by red, green, and blue individuals. Right panel: Results of the FineSTRUCTURE analysis were mapped to the birthplaces of grandparents.

They inferred recent demographic histories of the Miyako population using haplotype information. Although the effective population size of Miyakojima populations had gradually increased, the Irabu/Ikema population seemed to have experienced a drastic decrease in effective population size around 10-15 generations ago (Fig. 4). Although there are several possible explanations for this bottleneck in Irabu/Ikema population, one remarkable disaster during this period is a strong candidate. A large earthquake and a subsequent tsunami hit the Yaeyama and Miyako Islands in 1771 (the Great Tsunami of Meiwa). In addition, there were large migrations from Ikema to Miyakojima after this disaster. Since many people on the Miyakojima also died in the tsunami, it was difficult for several settlements to keep city functions, so the government forced people to move from Ikema to Miyakojima. It is possible that these events were involved in the genetic bottleneck they found. 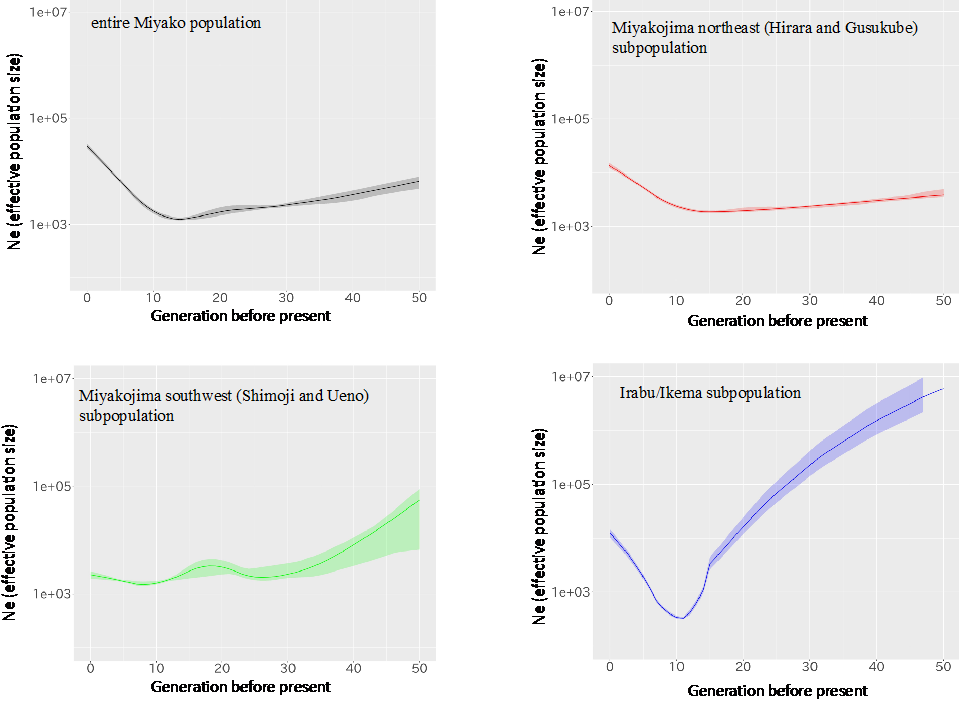 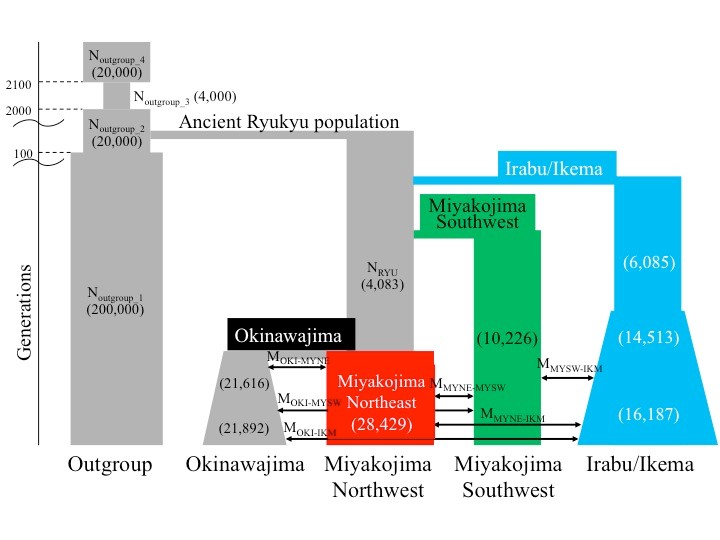 “In this study, we produced genetic evidence that reveals the previous population isolation history and gene flow among people living in the Miyako Islands. The genetic structure we observed likely reflects past events experienced in the Miyako Islands, such as migrations and disasters. This study has provided interesting novel insights and serving as blueprint for similar studies. We are currently attempting to accumulate more genetic information derived from the Ryukyu Archipelago with clinical information through the OBi Project, and such data will enable to understand the population history of the Ryukyu Archipelago further and be useful to identify novel genetic factors related to susceptibility to several common and/or rare diseases” said Professor Maeda. 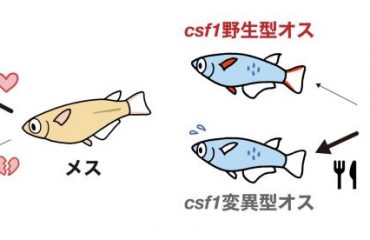 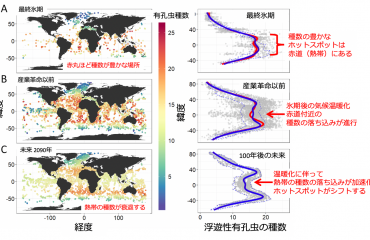 Past and future decline of tropical pelagic biodiversity 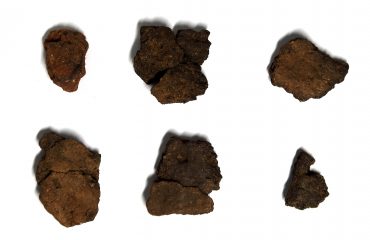